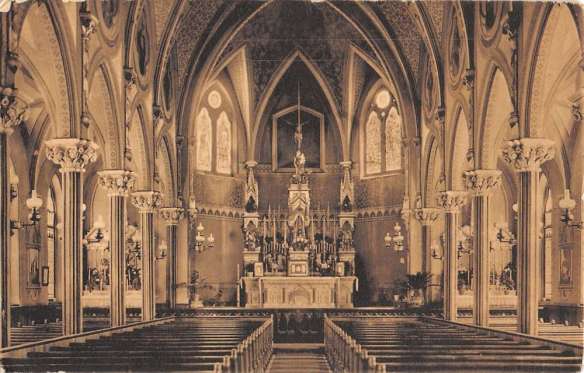 Monument at the birthplace of Charles Grandison Finney on Cunningham Road in Warren.

There were no great battles fought in Litchfield County, nor were any presidents born here. The county has, however, left an indelible mark on American history, perhaps in no area as great as in religion. The county was the home of Joseph Bellamy, Lyman Beecher, Horace Bushnell, and Michael McGivney. Another extremely prominent American religious leader who called the county home was Charles Grandison Finney, born in Warren in 1792. Finney was the youngest of fifteen children, and the family moved to upstate New York soon after his birth.

Finney has been called the “Father of American Revivalism,” and the area in western New York in which he operated became known as the “Burned-Over District” for the intensity of the religious revivals there. The high point of Finney’s revivalism was 1825-1835, and they were particularly popular in towns like Rochester that were undergoing dramatic economic transformations brought on by the opening of the Erie Canal.

Finney preached salvation through faith alone, but also wrote of the role of the individual’s will in achieving salvation. Finney’s religious views led him and his followers to promote social reforms, especially abolitionism and educational opportunities for women. These beliefs led him in 1835 to Oberlin College in Ohio, which accepted both genders and all races. Finney would go on to serve as the school’s president from 1851 to 1866.

Getting to this monument is very challenging; it is advised that those seeking it walk or mountain bike down Cunningham Road. Thanks to Warren historian Ellen Paul and the dog walker I fortuitously met along Cunningham for the directions! Thanks also to Jason and Amanda McGrew for their assistance.

The Unity of Brethren, better known as the Moravians, also played an important role in the early religious history of the county.  The group’s nickname stems from the refugees from Moravia, an area of the present day Czech Republic.  The Moravians were essentially followers of the Catholic revolutionary Jan Hus, who advocated for giving lay people a more prominent role in the church and having masses said in vernacular languages.  Hus was burned at the stake in 1415. 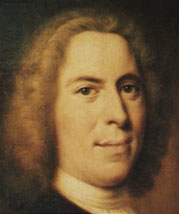 One of the principal tenets of the Moravian church is the “ideal of service,” which emphasizes the importance of educational and missionary work.  At the forefront of these ideals was Count Nicolaus von Zinzendorf, a German social reformer and Moravian bishop who led efforts to spread Christianity through the Native Americans of the Northeast.  Around 1740, von Zinzendorf himself came to America, and preached to Indians in New Milford.  He was so successful in igniting the fire of Moravianism that the natives agreed to move with Zinzendorf to Bethlem (today Bethlehem), Pennsylvania.  Harsh conditions and illness, however, soon led the Native Americans to return.

Monument to Rauch in Pine Plains, NY. Courtesy of Ancestry.com

Around the same time, a second Moravian mission was established in Sharon to minister to the settlements at Shekomeko (Pine Plains, NY), Wequagnock (near Sharon), and the Schaghticokes in Kent.  The mission was founded by the Reverend Christian Henry Rauch, who presided for two years before turning the work over to 26 year-old Reverend Gotlieb Buetner, who died two years later, and was buried at the site of the mission.

New York State chased the Moravians out of their borders in 1745, fearing that the missionaries were secret emissaries of the Catholic Church.  This led numerous Christian Indians to settle around Sharon, where the Moravian mission continued under the leadership of David Bruce, a Moravian teacher from Edinburgh, Scotland.  In 1789, George Loskiel wrote of Bruce’s activities in his History of the Moravian Missioners Among the North American Indians:

Bruce … resided chiefly in a house at Wequagnock … but sometimes resided at         Schaticook, whence he paid visits to Westenhunk, by invitation of the head chief of the Mohikan nation, soweing the seeds of the gospel wherever he came …. Twenty Indians were added to the church by baptism.  Brother Bruce  remained in his station till his happy departure out of time …. He was remarkably cheerful during his illness, and his conversation edified all who saw him.  Perceiving that his end approached, he called his Indian brethren present to his bedside, and, pressing their hands to his breast, besought them fervently to remain faithful unto the end, and immediately fell asleep in the Lord.

That was July 9, 1749.  A monument to Bruce and Joseph Powel, a later Moravian missionary, was erected in Sharon in October 1859, 110 years after Bruce’s death.  The monument still stands, hidden deep within the woods along Route 361.  On its east face is the following passage from Isaiah:

How beautiful upon the mountains

Are the feet of him that bringeth

That bringeth good tidings of good,

Special thanks to my friend and colleague Warren Prindle of Sharon for not only bringing this monument to my attention, but also hacking through the woods with me to find it! 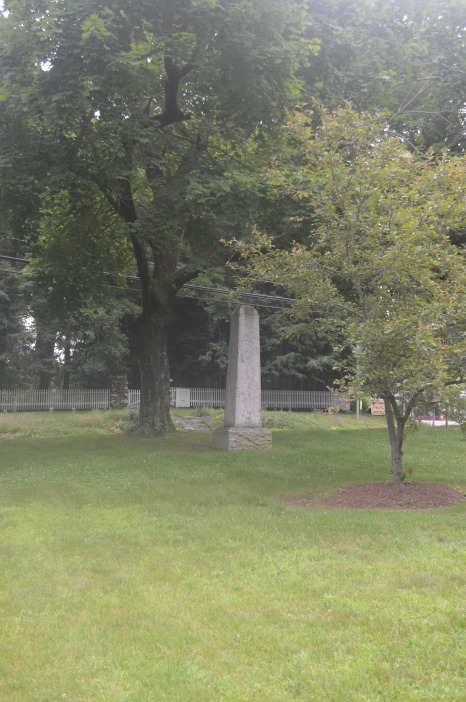