Eddie Collins was born Millerton, NY, (just over the border from Litchfield County) in 1887, and graduated from Columbia University at a time when very few major leaguers were college graduates. (Lou Gehrig also attended Columbia). Two years before graduating, Collins had signed with Philadelphia Athletics so he played professionally as Eddie Sullivan to protect his amateur status at Columbia.  Collins went on to play 25 seasons in the Major Leagues, retiring at the age of 43. Over his career he won four World Series titles (3 with A’s, 1 with White Sox),  with a .333 average and 3314 hits. While a member of the infamous 1919 White Sox team that became known as the “Black Sox” for throwing the World Series, Collins was not suspected of being in on the fix, as he was believed to play have played honestly. Bill James, the noted baseball statistical analyst, ranks Collins as the greatest second baseman of all time.

The 1939 National Baseball Hall of Fame induction. Eddie Collins is seated at the left of the front row, next to Babe Ruth.

Collins was voted into the National Baseball Hall of Fame in 1939 and took part in the first ever induction ceremony. (The first Hall of Fame class was 1936, but there were  no inductions until 1939.) As a participant in that ceremony, Collins stood on the steps of the Baseball Hall of Fame with such luminaries as Grover Cleveland Alexander, Ty Cobb, Walter Johnson, Nap Lajoie, Connie Mack, Babe Ruth, George Sisler, Tris Speaker, Honus Wagner and Cy Young.

Steve Blass was born Canaan in 1942, and pitched at Housatonic Valley Regional High School (where according to legend he buried his baseball socks in the mound after his last game in 1960). In a ten-year Major League career with the Pittsburgh Pirates, Blass went 103-76 with a 3.63 ERA. In 1968, the famous “Year of the Pitcher”, Blass led the National League in winning percentage, going 18-6.  He won 19 games in 1972. The highlight of Blass’s career came with the 1971 World Series, when he won two games – including the decisive 7th game – allowing only 2 runs in 18 innings. Since 1983, Blass has been a TV and radio announcer for Pirates’ games. Canaan’s Steve Blass Field is named in his honor. 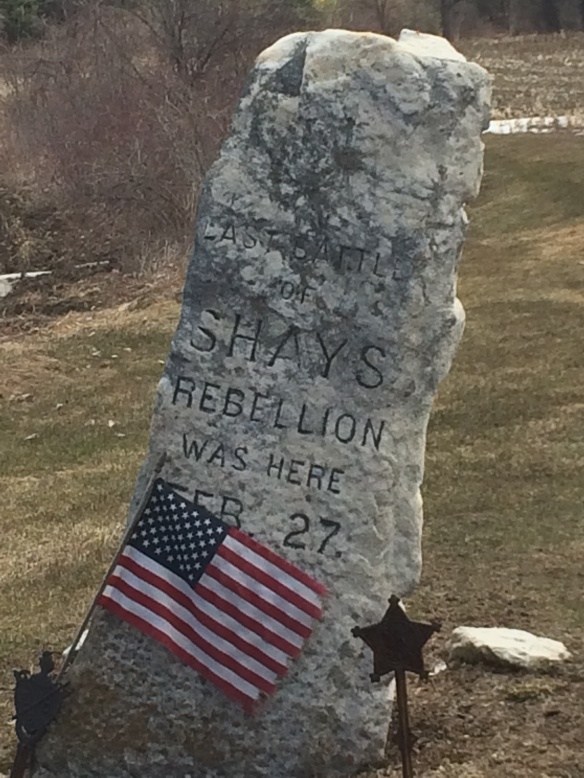 The United States’s first national government, the Articles of Confederation, was approved by the states beginning in 1777. In Connecticut, this was done through town meetings. Despite this support, the Articles did not solve all the young nation’s problems. Many farmers returning from war found themselves in debt and unable to pay their taxes in the gold or silver that Massachusetts required. When, in 1786, courts in that state began seizing the farms of delinquent taxpayers, angry farmers in western Massachusetts took up arms in an attempt to shut down these courthouses. The leader of the this movement, Revolutionary War veteran Daniel Shays, gave his name to the rebellion.

Shays and his men marched on courthouses throughout the central part of the state, while other Shaysites closed the court in Great Barrington. In January 1787, Shays led a force in an attempt to seize the federal armory in Springfield.  There they were met and routed by Massachusetts militia led by General Benjamin Lincoln.  Shays’s force dispersed, with many men making their way to New York and Vermont.  Many of those attempting to reach the Empire State were cut off by militia on February 27, 1787, on the road between Sheffield and Egremont.  In the ensuing battle, the last organized part of Shays’s forces was defeated. 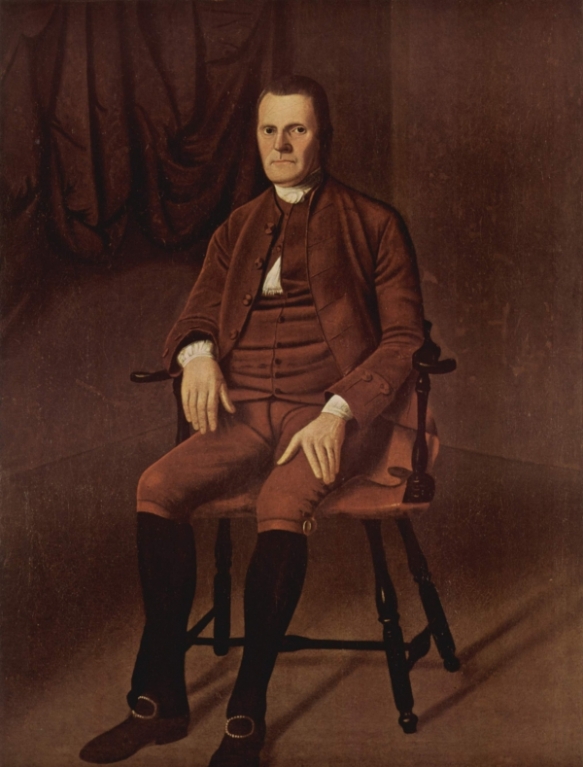 Roger Sherman, a one-time resident of New Milford, played a prominent role at the Constitutional Convention.

Several of Shays’s men – as well as the spirit of the rebellion – crossed the border into Litchfield County. In the spring of 1787, Dr. John Hurlbert of Alford, Massachusetts, a supporter of Shays, arrived in Sharon to awaken “a similar spirit.” Hurlbert organized a number of men under William Mitchell, who as captain trained his company in secret. Hurlbert, Mitchell, and three others were arrested, but when Shays’ Rebellion collapsed, the prosecutions were discontinued. The alarm raised by Shays’ Rebellion – and the inability of the federal government to act to stop it – resulted later that year in the Constitutional Convention that would meet in Philadelphia. 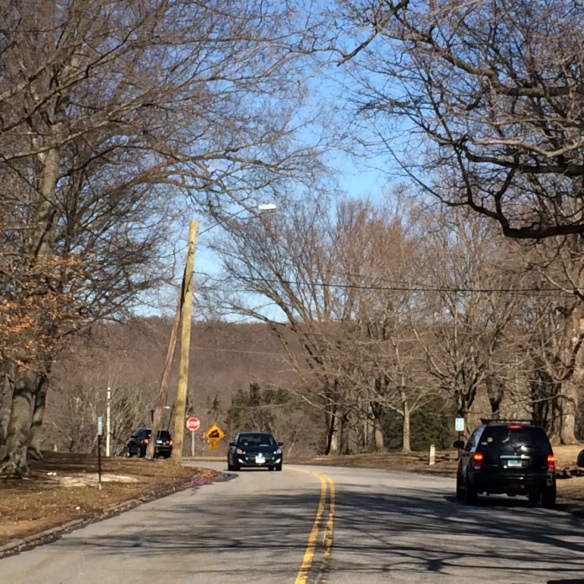 April 9th, the anniversary of the Lee’s surrender to Grant, marks the culmination of the Civil War sesquicentennial. Litchfield County soldiers served with the 29th Connecticut Infantry, an African American unit that was the first Union regiment to enter the Confederate capital of Richmond, and the 2nd Connecticut Heavy Artillery that pursued Lee’s army to the surrender at Appomattox Court House. While the war ended in the early spring, it was not until August 1865 that many of Litchfield County’s veterans returned home.  That month a great celebration in Litchfield honored returning veterans from the county. The village was decorated with enormous national flags while the smaller flags of a dozen army corps flew from the giant pole on the Green. A triumphal arch, made of papier-mâché, was erected on East Street, near where the Litchfield Historical Society now stands. It had the Sixth Corps flag in the center and two divisional flags on the side, commemorating the army units to which Litchfield’s soldiers belonged.  Below those flags were the names of the battles in which the 2nd Connecticut Heavy Artillery fought.

The returning veterans – 300 to 400 strong – arrived in East Litchfield by rail, marched to the town, and paraded through the arch – soldiers on one side, civilians once again on the other. 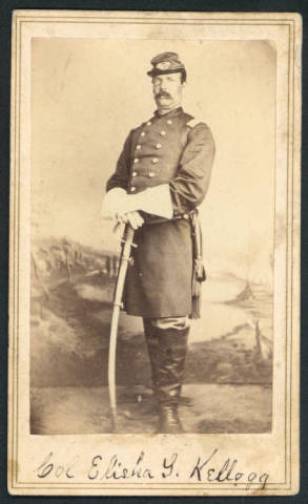 The local newspaper reported that “The reception of the 19th in this town on Tuesday was a most gratifying success.”  Residents of neighboring towns began arriving in the early morning.  Reverend Richards gave a benediction, and Lieutenant Colonel Nathaniel Smith of Woodbury gave a welcoming speech:

Congressman Hubbard, who lived on South Street and was a favorite of Lincoln’s who referred to the representative as “Old Connecticut, also spoke:

Thousands of people attended the festivities, which consisted of bands, food and drink, and performances.  An exhibit hall was set up with relics from the war, including the coat with the bullet hole that killed General John Sedgwick of Cornwall, captured swords, battlefield artifacts, paintings and photos of Henry Dutton (killed at Cedar Mountain, John Hubbard (the Congressman’s son), the three Wadhams brothers (killed at Fort Darling, the North Anna, and Cold Harbor), and Colonel Elisha Kellogg (killed at Cold Harbor).

At dark, an illumination allowed the festivities to continue until the lights went out at 10 p.m., when the crowd dispersed.