The town of Litchfield celebrated the nation’s centennial in grand style.  A committee had been formed “to arrange for the commemoration of the Centennial Anniversary of the Declaration of Independence.”  The festivities began on the evening of July 3, when the village bells were “rung from 8 to 10 o’clock P. M., and houses in the village illuminated.”

An 1869 issue of Harper’s Weekly depicted Fourth of July fireworks.

At sunrise on Independence Day, the town’s bells rang for another hour, and all townspeople were asked to display the American flag.  The formal public ceremonies began at 10:00 am with church services and a reading of the Declaration of Independence by Truman Smith, the 94 year-old former senator and congressman.  In the afternoon, a display of Revolutionary War artifacts was opened in the Court House.  The day concluded with another illumination and with fireworks over the center of town. 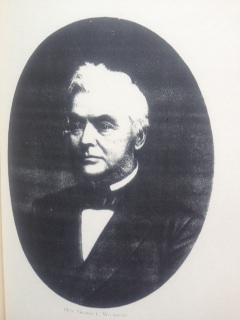 The driving force behind the festivities was George Catlin Woodruff, who that day delivered a 44-page address on the town’s history.  Woodruff was born in 1805, and was described by a fellow townsman as “erect in figure, and singularly robust; always of the finest health; always at work and never seemingly fatigued; nothing in nature so typified him as an oak which has withstood every vicissitude of storm a century of time.”

An 1825 graduate of the Litchfield Law School, Woodruff served several terms in the state legislature, and one term in the United States Congress.  He was best known for his 1845 history of the town, which was marked by the precision of his research.  The same year he wrote a Geneaological Register of the Inhabitants of Litchfield from 1720 to 1800.  In his address that day, Woodruff discussed the town’s history between 1776 and 1876, but was “concerned chiefly with the share our town had taken in the Revolution.”

Woodruff would go on to be the first vice president of the county historical society before his death in 1885.  It is not difficult to imagine that it was with great pride in his role in honoring the nation’s centennial that Woodruff had that memorable date carved into a stepping stone outside his home on South Street, opposite Saint Anthony of Padua’s Church.