The History of Litchfield County, published in 1881 by the J.W. Lewis Company in Philadelphia, suggests that North Goshen was once a thriving community.  The book offers a house-by-house guide of the area, describing the residents and their commercial and religious activities.

Today, nearly all vestiges of the community are gone, the land owned by the Torrington Water Company.  There are a few hints remaining, however, to the history of this area.  Along East Street North stands an animal pound, a sign suggesting that it was built “circa 1800.”

Animal pounds were a common sight in early America, as livestock often roamed free.  In fact, at the meetings that established the town of Goshen in 1739, the residents appointed three horse branders whose task was to apply a distinctive mark to each resident’s animals.  That year, 66 distinct marks were recorded in Goshen.

At that same meeting, two men were given permission to build town pounds.  Livestock, by town ordinance, could roam free from March to November.  However, those not in their owner’s barns by November would be impounded and cared for by the town’s pound keeper.  When the owner arrived at the pound to claim his animal, he would pay a fee to the keeper.  Town records in Goshen also indicate that those delinquent in paying their taxes could work off their debt by supervising the town pounds.

The walls of the pound had to be wide enough so that an animal couldn’t step over them.

As part of Goshen’s 250th anniversary in 1989, the Torrington Water Company restored this pound.  Its walls are 35 feet long and 25 feet wide, and stand 4 feet high.

Structures like the Goshen animal pound offer the 21st century explorer a glimpse of life nearly three centuries ago, and remind us of the centrality of livestock to the daily existence of those who inhabited Litchfield County.

We take to the woods for many reasons.  Thoreau famously wrote, “I went to the woods because I wished to live deliberately, to front only the essential facts of life, and see if I could not learn what it had to teach, and not, when I came to die, discover that I had not lived.”  Most of us take to the woods for less philosophical reasons – to hike, run, snowshoe, mountain bike, or bird watch.  Hidden amongst the Litchfield woods, however, are reminders of the way the land was used in the past.

There is little old growth forest left in Litchfield County.  In the southern environs of the county the land was cleared for farms.  In its northern reaches, Litchfield County’s woods were utilized for the charcoal needed to power iron furnaces.  When these industries began to transform or fade away, the forests reclaimed their original territory, engulfing many man-made objects and alterations to the landscape.

Perhaps this is most true of the White Memorial Foundation, which owns approximately 5,000 acres in Litchfield and Morris.  In these woods remain many implements of the county’s agricultural and industrial past. 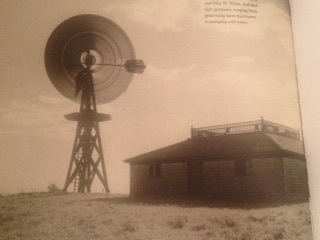 One fascinating example is the base on which the White family’s windmill once stood.  The explorer can find it on the appropriately named Windmill Hill, very near the White Memorial visitor center and museum.  The proximity is no coincidence.

John Jay White, whose children established the foundation in the early 1900s, was a New York real estate magnate who moved from 5th Avenue to Litchfield in 1863.  The home he built, Whitehall, in many ways epitomized the Victorian architectural fashion popular at the time. 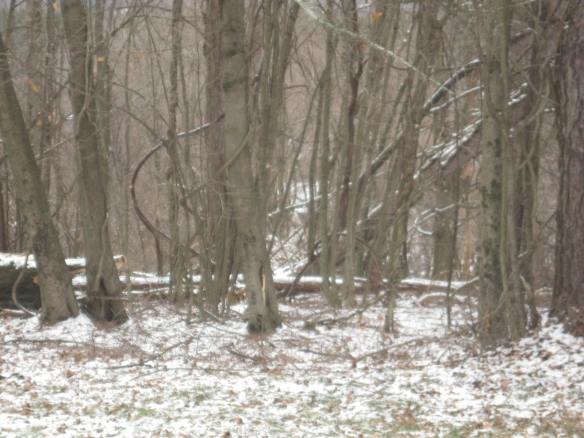 The view toward Whitehall from the site of the windmill.

On the top of a nearby hill White had a cistern built.  A nearby windmill pumped water into the covered cistern.  Pipes then brought the water more than a quarter mile to the house, which thus enjoyed natural water pressure. 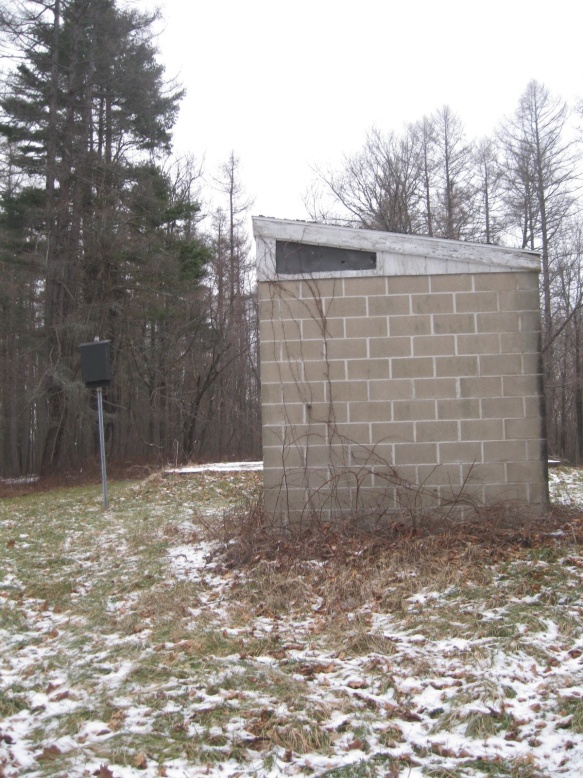 This structure stands on the approximate site of the windmill.

Today, a concrete slab marks the site of the cistern.  A concrete structure stands nearby; it was built to house the electric pump that replaced the windmill but was rendered obsolete a number of years ago when a new well was dug.

Whitehall still stands, albeit in modified form, as the visitor center and museum of the White Memorial Foundation.  Its top floor was removed and modifications made that erased the structure’s Victorian elements.  Only in the carriage house are glimpses of the Victorian splendor that once marked the estate evident.

This small marker and the remnants of the foundation mark the location of the Morris Academy, a landmark co-educational institution.

The Academy was the brainchild of James Morris III, who was born on January 19, 1752 in South Farms (which, in 1859 was renamed Morris in his honor).  Morris’ father James was a deacon, and the son harbored hopes of entering the ministry.  An enthusiastic reader, young James routinely traveled to Bethlehem to borrow books from that town’s library.  His education, which began with these library books, was guided by three remarkable teachers.

At eighteen, Morris began studies under Bethlehem’s Dr. Joseph Bellamy, one of the leading theologians of the late 18th century.  It is reported that Morris also studied under Nathan Hale, before enrolling at Yale.  While at Yale, Timothy Dwight, later president of the university and one of the leading figures in American educational history, served as Morris’ tutor.

The Battle of Yorktown

Following his graduation, Morris returned home to help on the family farm, teach students in Litchfield, and ponder a future in the ministry.  The Revolutionary War, however, got in the way.  He served first in the Connecticut Militia, then in the Continental Army, fighting on Long Island, at White Plains, and at Germantown, Pennsylvania, where he was captured.  Upon receiving parole, he hurried to Yorktown, Virginia, where he served Alexander Hamilton during that climactic battle of the Revolution.

After the war he returned home and married Elizabeth Hubbard, with whom he raised five children.  His fellow townspeople elected him both justice of the peace and a selectman.  By 1790, however, when children began regularly showing up at his door, Morris put aside his ideas about the ministry and looked instead for a career in education.

A typical scene in an early co-educational school

Rare for his time, Morris accepted both boys and girls as students.  This sparked significant discussion, as many believed that education would cause women to lose sight of their more traditional roles.  In 1794, a town hearing was held about the situation, and any charges against Morris were dismissed.

The foundation of the Morris Academy

By 1800, Morris’ school had grown so large that a formal structure was needed.  Wealthy subscribers were enlisted from the area to subsidize the $1,200 cost of the building, which opened on November 28, 1803.  (The building stood on the property where the James Morris School stands today)  By that time, Morris had educated students from all of the New England states except Rhode Island, as well as New York, New Jersey, Pennsylvania, Maryland, Virginia, South Carolina, Georgia and the West Indies.  He averaged between 50 and 75 students a year.

While Morris died in Goshen in 1820 (he is buried in East Morris), the school remained open until 1888.  As Barbara Nolen Strong wrote in her 1976 book on the Morris Academy, “The Morris Academy is entitled to be called a pioneer institution because of its ‘open door’ policy in coeducation. It was not the first in the United States, not even in Connecticut, but none of the other early academies opened their doors as wide and kept them open as long. No other coeducational academy spread its influence so far.” In a fitting gesture to the impact of James Morris on the community, the town of South Farms changed its name to Morris in 1859.