The Frances Howe Sutton bridge on the Little Pond Trail in White Memorial Note the plaque on the right side of the bridge.

The most popular trail in the White Memorial Foundation is the boardwalk that encircles Little Pond.  The bridge in the photograph above, which carries a plaque honoring Frances Howe Sutton, spans the outlet of the pond, where the Bantam River turns toward Bantam Lake.

In 1922, the White Memorial Foundation leased 150 acres east of Little Pond to the Litchfield Garden Club for the “creation and maintenance of a wild garden containing trees, shrubs and flowers native to Connecticut and to Litchfield County.”  (The Garden Club paid $1.00 to lease the land for ten years.)  The garden club created trails through this area to allow visitors to access the flora.  This became known as the Litchfield Wild Garden.  In 1928, the Munroe Bridge was built to offer visitors access to the west side of the Bantam River as it flowed into Little Pond.  (This is the bridge near the Litchfield Country Club.)

Ten years later, Herbert L. Sutton financed the construction of a second bridge, which was built in memory of his wife, Frances Howe Sutton.  This bridge crossed the river as it flowed out of Little Pond, and gave visitors access to the Pine Island section of White Memorial.

In subsequent years management of the Wild Garden passed from the Litchfield Garden Club to the Wild Garden Association and then to the Litchfield Hills Audubon Society.  In 1959, the boardwalk was completed around the entirety of Little Pond, in memory of Ralph T. Wadhams.  Finally, in 1975, the area of the Wild Garden reverted back to White Memorial.  While the trails in this area are no longer maintained, the careful observer can still locate where they once ran.

The view from the bridge.

In September 1985, flooding from Hurrican Gloria necessitated a rebuilding of the boardwalk.  Ultimately this project required 57,000 board feet of lumber, 2,600 hours of labor, tons of nails, and $73,000 to repair the 1.2 mile trail.  While entire sections of the trail and uncounted individual boards have been replaced since 1985, the structure of the boardwalk remains today.  Those who have ventured to Little Pond for birding in the spring or to admire the stark beauty of a New England winter understand why this trail remains White Memorial’s most popular. 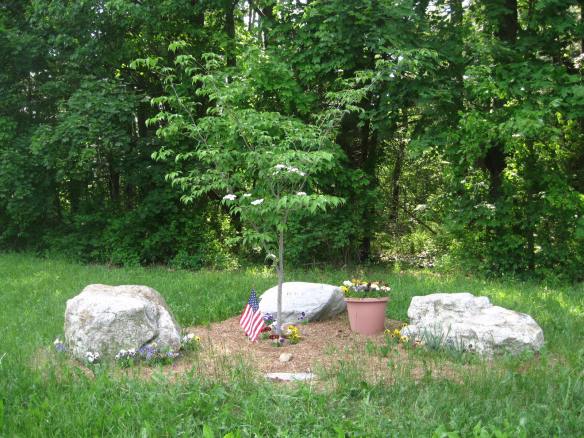 With the 37th annual Litchfield Hill Road Race only days away it seems appropriate to highlight a relatively new monument that shows that commemoration is an ongoing process.  Where the trail over Plumb Hill intersects with Whites’ Woods Road stands Road Race Park, a small plot of land with markers to recognize the contributions of those who have helped make the race possible.

What began in 1977 as the brainchild of a few friends to bring to Litchfield a road race modeled after the famed seven-miler in Falmouth, Massachusetts, has grown into a weekend of events that culminates with approximately 1,500 runners making their way through town and White Memorial.  Participants have come from all age groups and dozens of countries and have included those who walk the course to marathon champions Bill Rodgers and Joan Benoit Samuelson.  Runner’s World Magazine declared Gallow’s Hill the eighth most difficult hill in racing.

Of course, none of it would be possible without the volunteers.

One of the race’s notable volunteers was George Dwan, who served as race marshal at the site of Road Race park from the first race until his death in 2008.  With his friend Roberta Coffill Healy, Dwan would decorate the area with pink flamingos, silver Christmas trees, pinwheels, and other tacky trinkets. 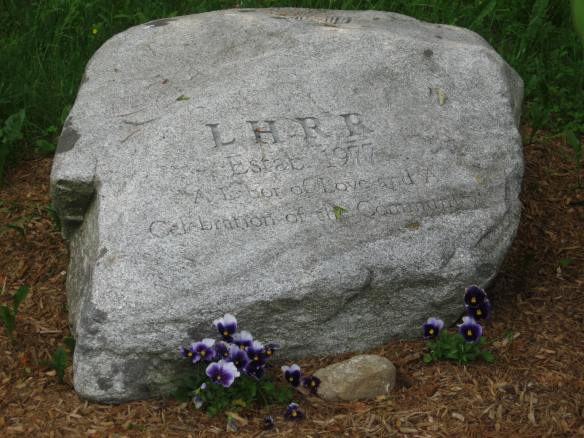 When George passed away, Roberta continued the tradition with her husband Jack.  She also was instrumental in commemorating the work that Dwan and others put into the race.  On the Saturday before the 2009 race, Road Race Park was dedicated.  It consists of three large stones; those on the left and right are sitting stones.  The center stone is inscribed with the words of race co-founder (with Bill Neller) Joe Concannon, “A labor of love and a celebration of the community.”  On the back of the stone is a running beer mug, a reminder that a sense of fun has always pervaded the race.

In front of the stone is a marker honoring George Dwan’s service to the Litchfield Hill Road Race.  It is fitting that a flamingo sits in the marker’s upper left hand corner.

Special thanks to Roberta Coffill Healy for sharing her memories of George Dwan and the story of Road Race Park!