With Litchfield stuck in a weather pattern that seems to bring more snow every day, perhaps a look back at the great Blizzard of 1888 is in order.

With little in the way of accurate meteorological predictions, the blizzard came as a surprise to the Northeast on Sunday, March 11, 1888.  It had been an unusually warm winter, and that day dawned with rain.  It soon turned to hail, then sleet, then ultimately snow.  Bitter cold and high winds set in, and the snow continued for three days.  When it all stopped, between 20 and 50 inches of snow had fallen in Connecticut, with drifts of 12 feet not uncommon.  (One drift in New Haven reached 40 feet high!)  The storm resulted in more than 400 deaths and an estimated $20 million worth of damage. 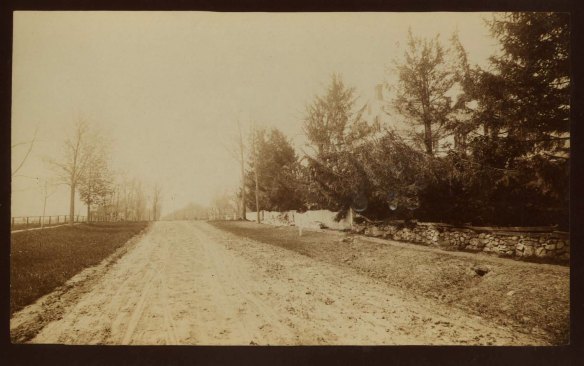 Dr. Buel’s house after the snow had melted. One source says the snow was melted within ten days; another says the last of the drifts didn’t melt until June! Courtesy of Litchfield Historical Society.

The following are excerpts about the blizzard from the Litchfield Enquirer:

March 12th – “The wind blew a perfect blizzard all day and the drifting and falling snow made even main streets almost impassable Monday night the storm continued with increasing fury and buildings rocked as though in a storm at sea.”

March 13th – “On Tuesday morning the wind had lessened though still blowing a gale with the thermometer at or near zero. The most remarkable drifts are at Dr. [H. W.] Buel‘s. One, a little west of the house, about 20 feet, to a level with the eaves. There is an addition on the west of Dr. Buel‘s house, reaching- about to the eaves, which is almost completely covered by the snow, so that our reporter, walking- along the top of the drift, passed completely over the roof of this part of the house, and down on the northern side. There is a drift on the east which is even higher, shutting up one of the library windows completely, and reaching nearly to the top of one of the large firs which form a hedge on that side of the house.

March 14th – “The wind is northeast and considerable snow is still falling. People are about on snow shoes skees (sic) and snow shoes extemporized out of boards some carrying groceries to those in great want. Little business is doing. Most of the stores are closed. A few are open with people standing about comparing notes about tunneling to their woodsheds drifts over second story windows and other marvels of the great storm.” 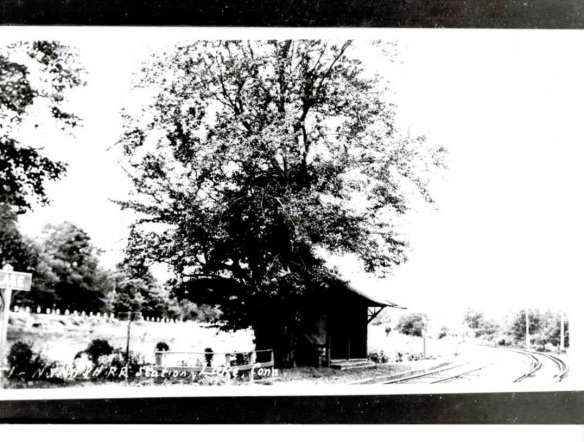 The Shepaug Railroad was out of service until March 16th. A railroad cut near the Lake Station (today the Cove in Bantam) was filled with a drift 22 feet deep!

And all this snow needed to be removed from the transportation network without the benefit of modern plows! 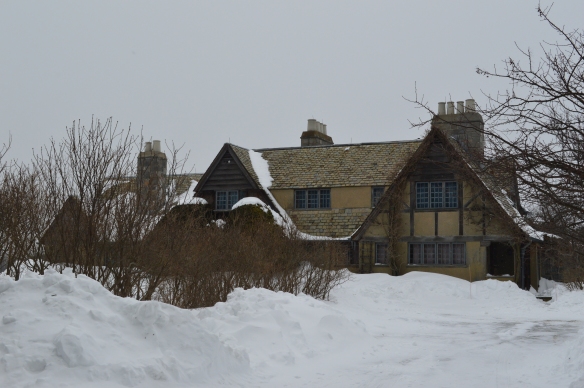 A modern visitor to the Topsmead State Forest may think he or she has stepped into a Harry Potter novel.  The English cottage at the hilltop – the name means “top of the meadow” – is reminiscent of the Weasley clan’s home in J.K. Rowling’s novels.  The home and grounds, however, are reminders of an important era of the region’s history. Topsmead was the summer home of Edith Morton Chase and her companions, Mary and Lucy Burrall. 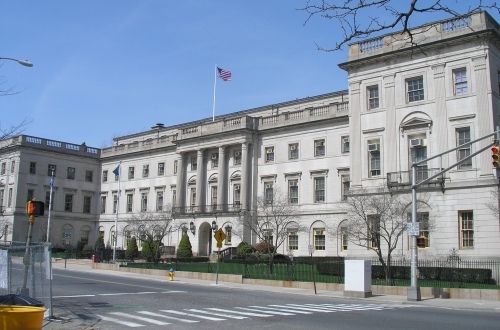 The former headquarters of Chase Brass and Copper, designed by Cass Gilbert who also designed the Woolworth Building in New York and the Supreme Court building in Washington, DC.

Ms. Chase was the daughter of Henry Sabin Chase, the first president of Chase Brass and Copper Company, founded in Waterbury in 1876. The company became one of the most profitable businesses in the city, and Chase hired the noted architect Cass Gilbert to design the corporate headquarters across the street from Waterbury’s City Hall. Shortly before his death in 1917, Chase purchased 16 acres on East Litchfield’s Jefferson Hill as a gift for his daughter, who built a small cottage on the grounds.  Over the next 55 years, Edith Chase made twenty-four additional land purchases, enlarging the estate to 511 acres. Ms. Chase hired architect Richard Henry Dana, Jr.  (who designed the main building of St. Margaret McTernan’s school, established by Henry Chase and now called Chase Collegiate) to create a grander house.  Dana designed a structure in the English Tudor style, with brick and stucco walls, and a slate roof.  The interior walls are oak and stucco, and the house was decorated with 17th century antiques. 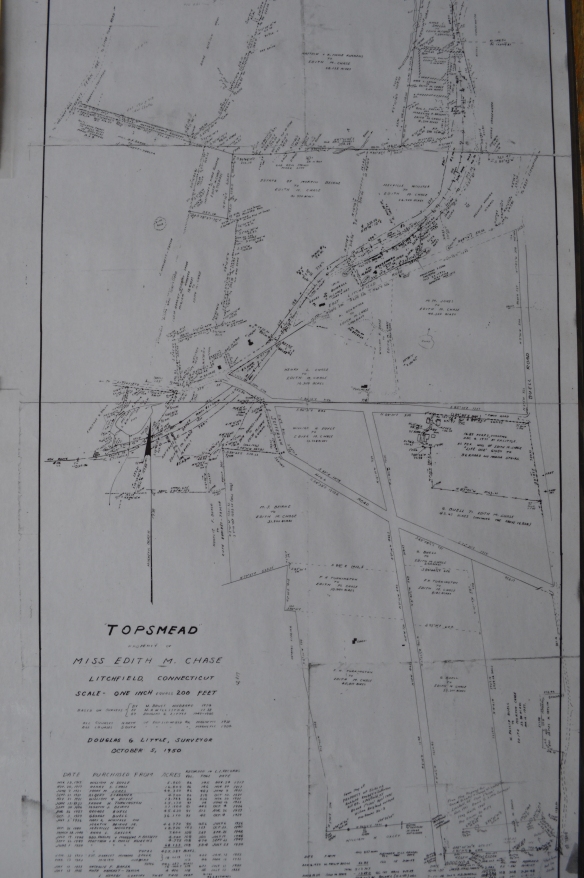 Property map of Topsmead, displayed at the site.

Edith Chase was a lover of the outdoors and she paid great attention to the landscaping.  Formal gardens surround the house, apple trees line the driveway, and holly and lilac grow against the house. In 1927, Ms. Chase purchased the adjoining Buell Farm, which was used to produce the estate’s food, with vegetable gardens, dairy operations, and beef, hogs, sheep, and poultry.

The Topsmead meadow in winter, a wonderful spot for snowshoeing or cross-country skiing.

Edith Morton Chase died in 1972 and willed her estate to the people of Connecticut.  It was renamed Topsmead State Forest, and thanks to an endowment left by Chase it preserves much of the estate as it appeared at her death.  Particularly significant is the meadow, which preserves a landscape that has been lost in much of Connecticut.