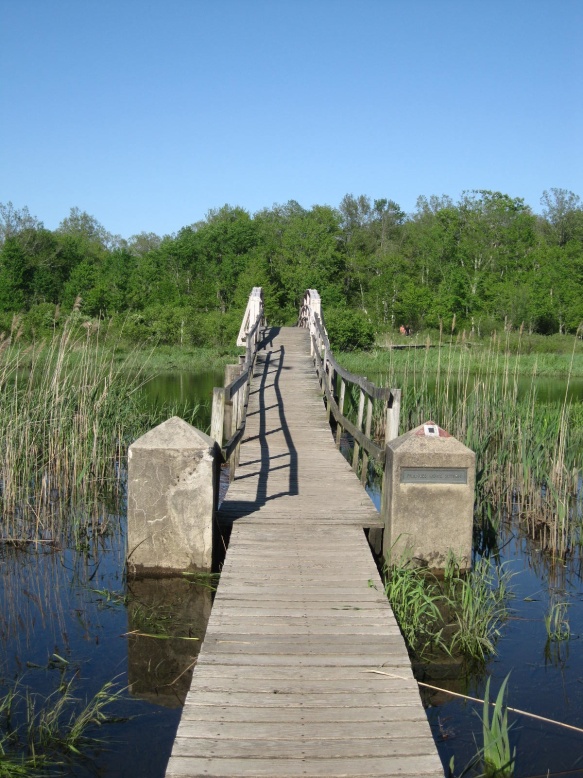 The Frances Howe Sutton bridge on the Little Pond Trail in White Memorial Note the plaque on the right side of the bridge.

The most popular trail in the White Memorial Foundation is the boardwalk that encircles Little Pond.  The bridge in the photograph above, which carries a plaque honoring Frances Howe Sutton, spans the outlet of the pond, where the Bantam River turns toward Bantam Lake. 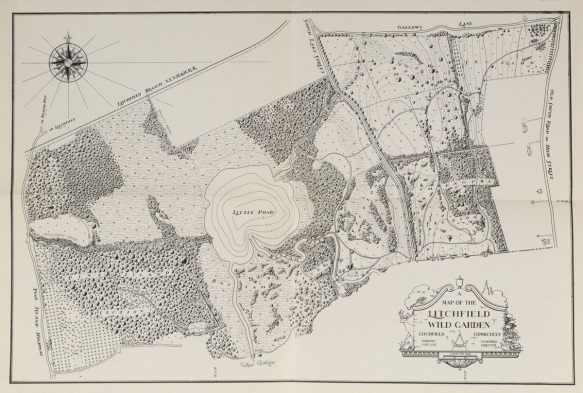 In 1922, the White Memorial Foundation leased 150 acres east of Little Pond to the Litchfield Garden Club for the “creation and maintenance of a wild garden containing trees, shrubs and flowers native to Connecticut and to Litchfield County.”  (The Garden Club paid $1.00 to lease the land for ten years.)  The garden club created trails through this area to allow visitors to access the flora.  This became known as the Litchfield Wild Garden.  In 1928, the Munroe Bridge was built to offer visitors access to the west side of the Bantam River as it flowed into Little Pond.  (This is the bridge near the Litchfield Country Club.) 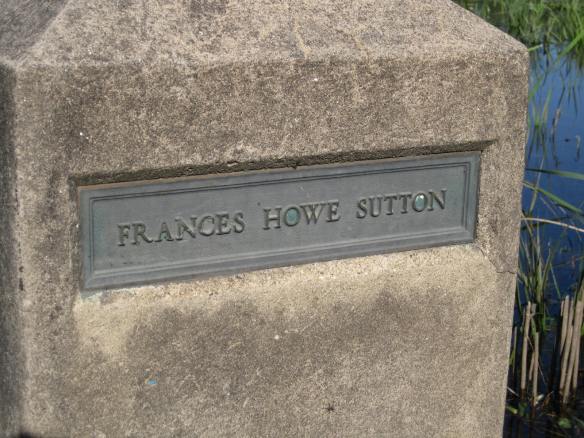 Ten years later, Herbert L. Sutton financed the construction of a second bridge, which was built in memory of his wife, Frances Howe Sutton.  This bridge crossed the river as it flowed out of Little Pond, and gave visitors access to the Pine Island section of White Memorial.

In subsequent years management of the Wild Garden passed from the Litchfield Garden Club to the Wild Garden Association and then to the Litchfield Hills Audubon Society.  In 1959, the boardwalk was completed around the entirety of Little Pond, in memory of Ralph T. Wadhams.  Finally, in 1975, the area of the Wild Garden reverted back to White Memorial.  While the trails in this area are no longer maintained, the careful observer can still locate where they once ran.

The view from the bridge.

In September 1985, flooding from Hurrican Gloria necessitated a rebuilding of the boardwalk.  Ultimately this project required 57,000 board feet of lumber, 2,600 hours of labor, tons of nails, and $73,000 to repair the 1.2 mile trail.  While entire sections of the trail and uncounted individual boards have been replaced since 1985, the structure of the boardwalk remains today.  Those who have ventured to Little Pond for birding in the spring or to admire the stark beauty of a New England winter understand why this trail remains White Memorial’s most popular.