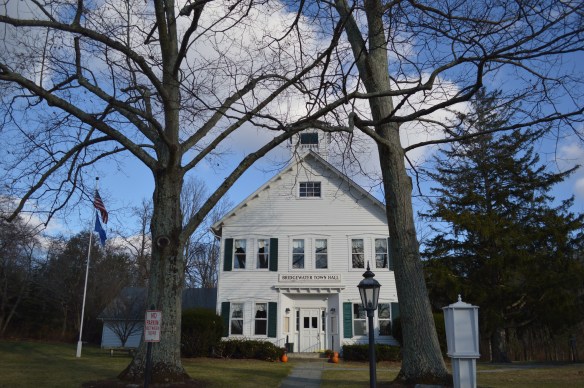 This summer marks the 100th anniversary of the beginning of World War I. The global conflagration, which resulted in nearly 20 million deaths, had an impact on the small towns of Litchfield County. The above photograph shows two red oaks in front of the Bridgewater town hall. They were planted in 1922 in memory of two town residents who lost their lives in the war, Joseph Wellwood and John Sheskey.

Wellwood, 21 years old, enlisted in May 1917 and was assigned to an ambulance company. Sent to Kansas for training, he died there of scarlet fever in February 1918. Shesky was killed during an artillery barrage at the Battle of Vesle on September 3, 1918, a bit more than two months before the end of the war.

Many of the towns in the county have monuments commemorating their dead from the Great War, or the World War; those who put up these monuments in the 1920s and 20s had no inkling that another world war was approaching. Typical of these monuments is the monument on the Litchfield green. Stars denote those who died in the war.

However, a close examination of the Litchfield monument reveals that these stars were perhaps added to the monument later, with holes being drilled into the bronze and the stars inserted like a pin. Clayton Devines died of influenza (which killed 50 to 100 million people worldwide between 1918 and 1920) at training camp in Jacksonville, Florida. Joseph Donohue served in Company D of the 102nd Infantry. Killed in France, he had lived at the Junior Republic in Litchfield. His adopted hometown honored him by placing his name on the town monument and recognizing his sacrifice with a star still visible today.

Henry Cattey was from Northfield, living on Marsh Road. He was also killed in action in France. While his name is on the memorial, next to it is only a small hole. Was there once a star that perhaps fell out over time? Cattey is not the only casualty of the Great War to have lost his star. Three names have stars next to them; six others have only the hole. It is fitting during this centennial that these stars be replaced and the proper tribute paid to these made who made the ultimate sacrifice for their country.