Author’s note:  See a related video about Litchfield and the Civil War done in cooperation with litchfield.bz here:   http://youtu.be/PVDBNlzGi6g

Along Route 43 in Cornwall Hollow lies the grave of one of the highest-ranking Union generals killed 150 years ago in the Civil War, Major General John Sedgwick. 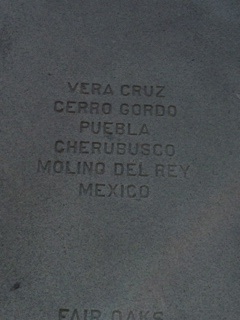 The battles of the Mexican War in which John Sedgwick participated, from the monument in Cornwall Hollow.

Sedgwick was born in Cornwall Hollow on September 13, 1813. From a military family, he enrolled at the United States Military Academy after attending Sharon’s one-room schoolhouse. Graduating from West Point in 1837 he fought in the Seminole War and the Mexican War. While serving on the Kansas plains in the 1850s he received word that his family’s Cornwall Hollow home had been destroyed in a fire. He took leave from the army to build the house that still stands near his grave.

Sedgwick’s star rose rapidly after the firing on Fort Sumter. He was commissioned a brigadier general, then was promoted to command a division and ultimately the Sixth Corps of the Army of the Potomac. He was beloved by his men, who called him “Uncle John.” One of his soldiers described him as “an old bachelor with oddities, an addiction to practical jokes and endless games of solitaire.” He fought at some of the war’s most famous battles: Antietam (where he was wounded three times), Chancellorsville, Gettysburg. 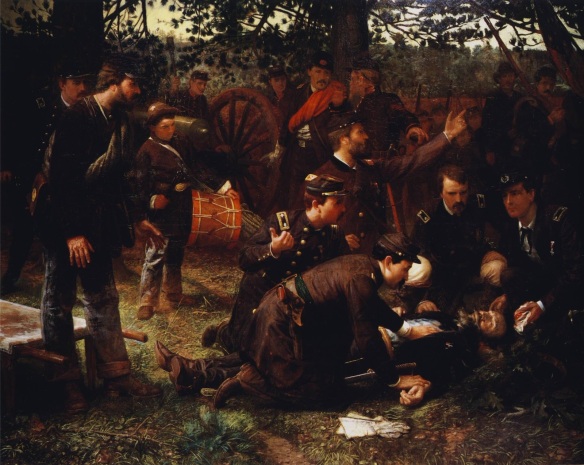 “The Death of General Sedgwick, Spotsylvania, May 9, 1864” by Julian Scott.

Commanding his corps at Spotsylvania Court House on May 9, 1864, Sedgwick was surprised to see his men dodging the fire of a distant sharpshooter. “What, what!” he proclaimed. “Men dodging this way for a single bullet? What will you do when they open fire along the whole line. I am ashamed of you.” Laughing, Sedgwick announced, “They couldn’t hit an elephant at this distance.” Almost instantly a bullet struck “Uncle John” just under the left eye. His lifeless body fell into the arms of his chief of staff.

Sedgwick’s body was taken to Washington, DC, where a military procession was held. Another procession was held in New York City. More than 2,000 people turned out for the Cornwall Hollow funeral. In 1892, the Grand Army of the Republic marked the grave with an obelisk bearing the Greek Cross, symbol of Sedgwick’s beloved Sixth Corps. In 1900, Mr. and Mrs. Carl Stoeckel, friends of the general’s sister, erected the monument across the street, which bears the names of the Mexican and Civil War battles in which the general fought, and the inscription “the fittest place where man can die is where man fights for man.”