Situated in what appears to be a typical Connecticut rustic barn along Flanders Road in Bethlehem is a holiday and artistic treasure. 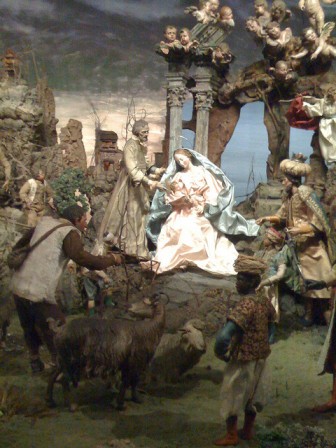 Victor Amadeus II was crowned king of Sardinia in 1720.  As a coronation gift, he was presented with a Neapolitan crèche, consisting of 68 figures made of wood, terra cotta, porcelain, and jute.  They represent the Christ child, Mary and Joseph, shepherds, the three kings, and Italian villagers.  Their village is made from the bark of cork trees, and gives insight into the activities of those who lived along the Italian coast in the 18th century.

Following the king’s death in 1732, the crèche was obtained by an Italian noble family, and it made its way to the United States in 1948.  The Abbey  of Regina Laudis was established the previous year, born out of the destruction of World War II.  Mother Benedict Dunn was born Vera Duss in the United States, but lived much of her early life in France.  She spent most of the war in the bell tower of the Abbey of Notre Dame de Jouarre, from which she watched the advance of George Patton’s liberating United States Third Army.  The kindness and sacrifice of the soldiers led Mother Benedict to establish a foundation in the United States.  The nuns were welcomed to Bethlehem by the artist Lauren Ford, who opened her home to the order until they could find a place of their own.  A local industrialist named Robert Leather donated the 400 acres that today comprise the Abbey.  The crèche was a gift of Loretta Hines Howard, who presented it to the Abbey in 1949, in memory of her husband.

Several years later, Mrs. Howard donated a similar crèche to the Metropolitan Museum of arts, where it graces their Christmas decorations every December.  The Metropolitan’s curatorial staff was instrumental in the three-year restoration process the Regina Laudis crèche underwent from 2005 to 2008.  The crèche returned to Bethlehem for Christmas 2008 after the figures had been cleaned and repaired, the original 1720 costumes being hand stitched.

The barn, which itself dates to the 18th century and once belonged to famed local minister Joseph Bellamy, was outfitted with climate control technology to ensure the preservation of the pieces.

To all of those who have taken the time to stop by this blog, a very happy holiday season!

1 thought on “A Christmas Treasure in Bethlehem”