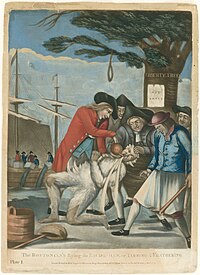 Seth Thomas was born in Wolcott, Connecticut, in 1785.  His education reportedly consisted of only a few weeks in grammar school before he began work on the family farm.  When Seth was 12, his father died and his mother sent him off to be an apprentice to Daniel Tuttle, a neighboring carpenter.  Tuttle taught Thomas arithmetic, the use of tools, and the principles of running a business.  At the age of 21, Seth Thomas struck out on his own to be a carpenter.

Around 1806, Thomas went to work for Eli Terry, the nation’s leading clockmaker.  Using his carpenter skills, Thomas outfitted Terry’s Plymouth factory with stools and benches, then made the various gears in the internal mechanism of Terry’s clocks.  In 1810, Terry sold his business to Thomas and Silas Hoadley, who formed the Thomas and Hoadley Mechanics and Company and continued making the grandfather clocks that Terry had popularized. The partnership was short-lived however, and by 1813, Thomas had struck out on his own.

In looking for a location for his own factory, Thomas found a site on the Naugatuck River in what was then known as Plymouth Hollow, which would be renamed Thomaston.  (This is the site where the Seth Thomas Clock Factory still stands.) Plymouth Hollow was a community of only 20 houses at the time, but Thomas’s factory would soon bring excitement to the town.  Operations began early in the morning, and workers put in twelve hour days for a daily wage of between 75 cents and $1.25. Thomas ran a company store for his employees and occasionally sponsored dances. Initially his factory produced the same type of grandfather clock he made with Hoadley. However, when Thomas’s mentor Eli Terry developed a cheaper shelf clock, the market for the “tall clock” nearly dried up.  Fortunately for Seth Thomas, Terry was overwhelmed with orders and sold the rights to the patent to Thomas for $1000.  Clocks were sent by ox cart to New Haven for shipment to New York.  Business was so brisk that by 1825, both Terry and Thomas had made $100,000 in profit, and Thomas spawned cottage industries across the town in making cases and transporting supplies and products.

In later years, Thomas diversified his business holdings, opening a cotton mill in town, sponsoring railroads, and dabbling in real estate development.  In 1853, he incorporated his business as the Seth Thomas Clock Company, so that operations could continue after his death, which came in 1859, when Thomas was 74.  His clocks lived on, incorporating new brass parts, expanding into watch, alarm clock, and marine clock production, and made the famous tower clock in Grand Central Station.  The Seth Thomas Clock Factory building that stands on Main Street in Thomaston was built around 1915, and was severely damaged in the Flood of 1955. Eventually the company was bought by the General Time Corporation, which itself was bought by a series of other corporations. Operations ceased around 1980, but the name Seth Thomas lives on in the quality of his clocks, and in the name of the community, which separated from Plymouth in 1875.